The annual Open House New York Weekend unlocks the doors of New York’s most important buildings, offering an extraordinary opportunity to experience the city and meet the people who design, build, and preserve New York. From historical to contemporary, residential to industrial, hundreds of sites across the five boroughs are open to visit, with tours, talks, performances, and other special events taking place over the course of OHNY Weekend. Through the unparalleled access that it enables, OHNY Weekend deepens our understanding of the importance of architecture and urban design to foster a more vibrant civic life, and helps catalyze a citywide conversation about how to build a better New York. 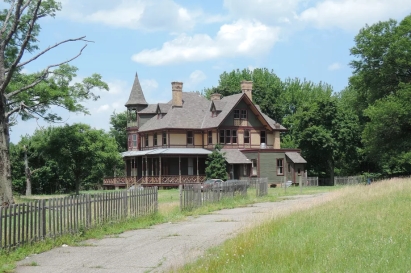 via Curbed – For an enterprising real estate investor—or someone who likes really freaking creepy homes—this newly listed Staten Island house might be a gem. It’s no ordinary home, you see; it’s the Kreischer Mansion, one of the island’s most notorious properties.

The house was originally built in the late 19th century by Balthasar Kreischer, a German-born immigrant and brick-maker who went on to create one of New York City’s first company towns, known as—of course—Kreischerville. He was responsible for building a small spattering of workers’ houses that were built in the 1870s complement the family’s manufacturing facilities, along with other services—shops, churches—to serve the growing community. (One of those, the the Free Magyar Reformed Church, is a NYC landmark that stands today.) 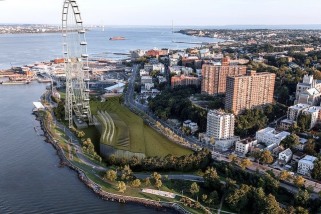 The fate of Staten Island’s New York Wheel—once scheduled to rise this year as the world’s tallest Ferris wheel—is now in jeopardy, after an ongoing legal battle ended this week with the developer firing the project’s design-build team.

According to court documents filed on Wednesday and obtained by the Staten Island Advance, the developer behind the 630-feet-high, $590 million observation hub/wheel has accused design-build team Mammoet-Starneth LLC of failing “to meet multiple design and construction deadlines.” Those delays have cost the developer of NY Wheel $16 million in damages and an additional $20 million in lost profits, the civil complaint alleges.

The project is now “indefinitely delayed,” according to the the Advance.

“Due to the inability of Mammoet-Starneth LLC (‘Mammoet’), the design-build team for the Wheel, to meet multiple design and construction deadlines, the developer has come to the conclusion that the best path forward for this project is to seek other means to take on the remaining aspects of that ‘turnkey’ arrangement,” Cristyne Nicholas, NY Wheel spokeswoman, said in a statement.

New Yorkers might soon have a shorter wait for their Amazon purchases.

The online-retailer plans to open one of its giant fulfillment centers in a Staten Island industrial park by the end of the summer, the New York Post reported.

Amazon will lease nearly 1 million square-feet of space inside the 200-acre Matrix Global Logistics Park, at a former oil tank storage facility off Gulf Avenue, for their first mega-warehouse in New York state, the paper reported.

The New Jersey-based owner of the site, Matrix Development Group, and Amazon declined to comment on the report when contacted by DNAinfo Monday.

“Unfortunately, today’s New York Post story contains several inaccuracies, and I ask Staten Islanders to remain patient a little longer on news about the future of the Matrix development,” Oddo said in a statement.

“After the battle against the attempt to build a NASCAR track on this property those of us who opposed it promised a better project would come along, one that would create real jobs for Staten Islanders and provide our borough with lasting economic benefits. We are almost at the point where our work will reach fruition on one of the biggest jobs bonanzas in our borough’s history.”

The 671-acre site was originally proposed to house a 82,2500-seat NASCAR racetrack after International Speedway Corporation — which owns NASCAR — bought the space for $100 million in 2004, the New York Times reported. 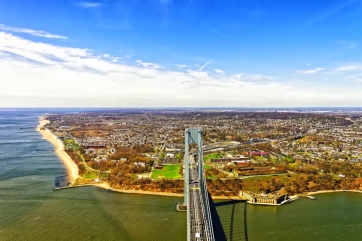 The cheapest and priciest places to live on the island, based on price per square foot

via Curbed.com: we asked real estate research firm NeighborhoodX to train its focus on Staten Island to see how various neighborhoods on the island stack up—and the numbers show that when it comes to real estate prices, Staten Island is hardly one-size-fits-all.

Rather than looking at median asking price—which NeighborhoodX felt would be skewed, given the myriad property types throughout the borough—the firm analyzed the asking price per square foot, and the asking price range, for 31 Staten Island neighborhoods for the month of April. (Excluded from the analyzation were foreclosures and short sales, affordable and age-restricted housing, properties positioned as development sites, and outlier properties with incomplete or contradictory information.)
Constantine Valhouli, co-founder of NeighborhoodX, reports that asking prices range from a low of $142 per square foot all the way up to $909 per square foot. The cheapest property, at $142/square foot, is located in Randall Manor. The priciest property is located in Rosebank, the firm found.

To put this in context, the highest price per square foot on the island is still significantly less than in Manhattan, where the median is $1,360, or Brooklyn, which hovers right around $1,000, according to Corcoran’s Q12017 reports. (Insert crying face emoji here.)

The price ranges differ considerably depending on the product in each neighborhood, Valhouli says. “Certain neighborhoods with single-family houses may not appear as expensive when using price-per-square-foot, but given the large size of these houses, the median asking price would make it much more expensive,” he notes. 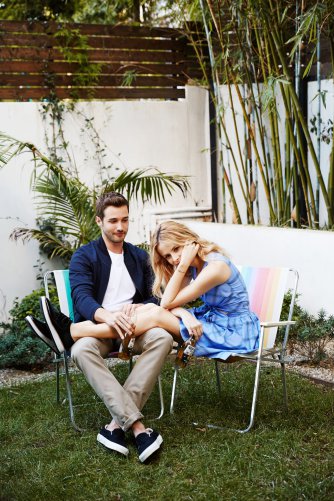 Moving in with a significant other can be simultaneously thrilling and daunting. Once the joy of getting to spend every waking (and sleeping) moment with your loved one wears off, you feel the reality that you’re going to have to find a harmonious way to combine your belongings and design styles. “Even if your tastes and choices are dramatically different, don’t panic, I’ve got you covered,” HGTV design pro and maker J. Pickens told POPSUGAR. “Trust me — even the greats don’t see eye to eye on all, but compromise and communication are key. Follow my tips for the task of moving in together and you’ll be in it for the long haul.”

Check out J.’s must-read tips to managing moving in together below, then get to packing!

1. GROW UP YOUR DESIGN

“Use this as an opportunity to ‘mature your surroundings.’ It’s a great time to box up the remnants of your single life, man-cave leftovers, and girlie accessories.”

2. START WITH A CLEAN SLATE

“Move into a new space or start fresh in a current space — it is important to start with a clean slate. You are building this new phase of your relationship together and it is a great opportunity to create and collect as a couple.”

“Get inspired — pop that Champagne and pull up your favorite inspiration images.” We recommend creating a private Pinterest board together where you can each share products and images you love. 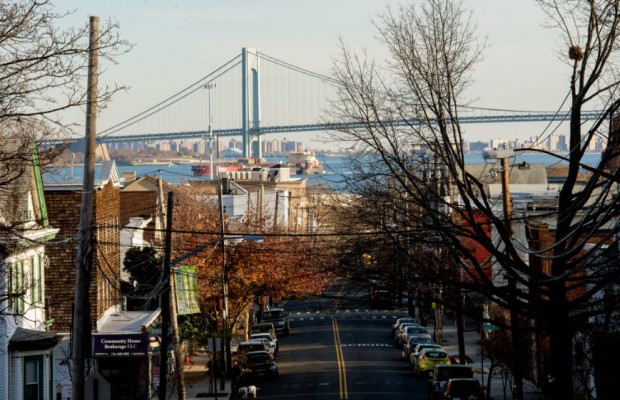 Danielle Caputo, 37, grew up in Bath Beach, Brooklyn, not far from the Verrazano-Narrows Bridge, but had never spent much time on the other side of it, in Staten Island.

Then, in 2015, on the way to visit the Staten Island Zoo, she was impressed by the island’s North Shore, including the walkable, architecturally interesting neighborhood of Stapleton, with its spacious houses; at the time she and her family were renting a two-bedroom apartment in Dyker Heights, Brooklyn.

“I always thought Staten Island was so suburban,” said Ms. Caputo, a hair stylist. “I didn’t think it could be so old and historic.”

Apparently, the grass is greener on the Staten Island side. 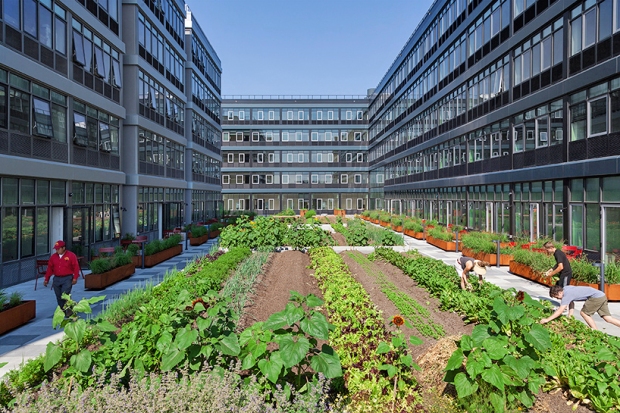 So, how does a rooftop farm grow in Stapleton, S.I.?

Read on and get the full story from ABC7NY…

END_OF_DOCUMENT_TOKEN_TO_BE_REPLACED 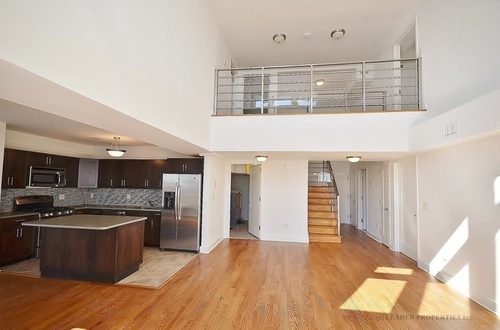 PENTHOUSE 9H AT THE ACCOLADE IN STATEN ISLAND

Yesterday, Curbed.com posited this very question in a post regarding the recent $1 Million dollar sale of a Staten Island Penhouse.

Welcome Staten Island to the million-dollar condo club: This year, two penthouse apartments in The Accolade, a building in St. George right by the Staten Island Ferry Terminal, sold for more than $1 million apiece—the first condos in the borough to go for that much. Penthouse 9G closed for nearly $1.3 million in May, and just this week, Penthouse 9H (pictured here) closed for more than $1 million. The three-bedroom duplex has views of the harbor, Manhattan, and the Verrazano-Narrows Bridge.

Does this mean St. George has arrived? Maybe: The Accolade has sold nearly all of its penthouses, save one (which is currently on the market for $1.35 million), and it’s tempting residents with amenities like a kids’ play room, a gym,a pet spa, on-site parking, and landscaping and snow removal. 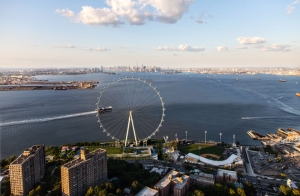 By the time Staten Island’s giant observation wheel finally opens in 2017, it may not be the tallest in the world. But right now, its planned 625-foot height tops all other Ferris wheels, and its views, unsurprisingly, have been touted as the main attraction. (Along with the promise the project, along with its neighboring outlet mall, holds for revitalizing St. George, the area by the Staten Island Ferry Terminal and the Staten Island Yankees’ stadium.) While we await the wheel itself, enterprising Staten Island resident Scott Grella sent a drone up from the site to scope out the views during a particularly lovely sunset. First, the rest of the city, while beautiful, looks mighty tiny and far away. Second, just remember that because of FAA regulations, the drone couldn’t fly all the way up the wheel’s highest point. Third, seeing these views when the wheel is actually built will be costly as heck: $25, $35, and $45 depending on when you go, with the ticket price escalating as the day turns into night.

Check out the drone video on Curbed.com