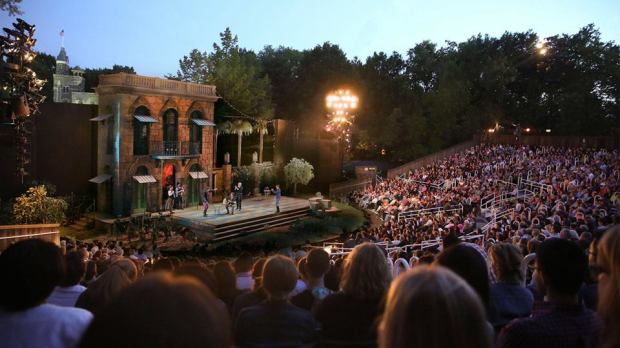 Saturday, August 4th, we invite you to wait in line at Stapleton Library for up to two free ticket vouchers that can be used that night to attend Twelfth Night at The Delacorte Theater!

Ticket vouchers will be distributed between 12PM (noon) and 2PM, while supplies last. Each person in line (age 5+) is allowed two (2) vouchers, and each voucher is good for one ticket. Vouchers must be exchanged for tickets at the Delacorte Theater Box Office in Central Park between 5PM and 7:30PM. Vouchers are only valid until 7:30PM for performances on the day they are issued.

About Twelfth Night: In celebration of five extraordinary years of Public Works, a Public Theater initiative that invites diverse communities across New York to create ambitious works of participatory theater, Free Shakespeare in the Park presents a re-imagining of Public Works’ 2016 musical adaptation of TWELFTH NIGHT for a full five-week run in Central Park. Professional artists and two rotating ensembles of community members from all five boroughs will perform together on the Delacorte stage in this enchanting comedy about Viola (Nikki M. James), a young heroine who washes up on the shores of Illyria, disguises herself as a man, is sent to court a countess, and falls in love with a Duke.

Featuring music and lyrics by critically-acclaimed songwriter Shaina Taub, this very special TWELFTH NIGHT is a unique partnership between two Public Theater programs that exemplify The Public’s commitment to radical inclusion. Oskar Eustis, The Public’s Artistic Director, and Kwame Kwei-Armah, incoming Artistic Director of London’s Young Vic, helm this unforgettable musical about love in all its many disguises.

About The Public Theater’s Free Shakespeare in the Park:

Joseph Papp founded The Public Theater’s Free Shakespeare in the Park with the belief that everyone has the right to a rich and vibrant cultural life. In the same way that the city’s public libraries offer a wealth of knowledge for free, he believed that a city like New York should have a public theater to offer the best possible artistic experiences for free. The Delacorte Theater has been the home for Free Shakespeare in the Park for more than half a century, and The Public has staged hundreds of productions for more than 5 million people. It has become one of New York City’s most beloved cultural traditions, putting the best actors of our time in the most celebrated plays of our culture, presented for free to the city of New York. An evening at Free Shakespeare in the Park means a starlit night enjoying Shakespeare’s universal stories and masterful artistry.