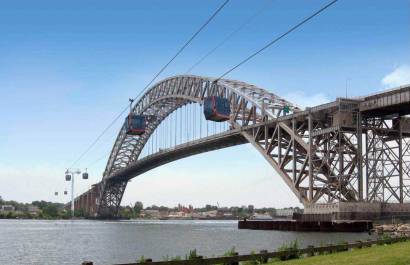 via Jersey Digs – Transportation between Manhattan, New Jersey, and Staten Island are one of the highest frustrations for commuters and residents alike. However, the Staten Island Economic Development Corporation’s latest project development may have the solution. The corporation is headlining a radical new idea to ease commuting between Staten Island and Manhattan through Bayonne: an aerial gondola that drops people off at a light rail station.

The aerial gondola design came from Leitner-Poma of America (LPOA), with the goal of creating a design to better connect commuters to the Hudson-Bergen Light Rail system in New Jersey. According to the SIEDC, the success of the aerial gondola could create a shorter commute for daily users between Staten Island and Manhattan – down to 33 minutes, in fact.

Initially, the SIEDC initiated a competition to find the best fit to carry out the design rendering and the proposed route for the best route to get commuters to and from Manhattan. The competition’s jury – comprised of architects, engineers, planners, and media – determined Elm Park to Bayonne would be the most efficient route from the three route submissions they received. “System length, total cost [of development], and travel time” were key factors in the final route decision for the jury, according to the SIEDC vice president of membership and outreach Alexandra Porto.