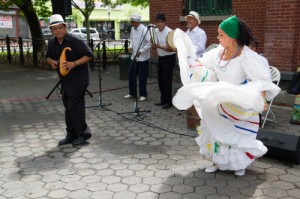 Ed Morales of the Village Voice once wrote that “life [in immigrant NYC] is tolerance for ambiguity.” This “tolerance for ambiguity,” he speaks of, is not only the tolerance for, but the ability to see the inherent strength in, living in-between: languages, cultures, perspectives, and approaches to daily life. Such a lifestyle requires constant improvisation on the part of the individual as they move between the myriad of cultural worlds they inhabit.

In honor of immigrant heritage celebrations in NYC, Beyond Borders-A Meeting of Cross-Cultural Improvisations seeks to explore this very concept through the medium of music. The three hour open-air concert brings musicians from varying cultural traditions present on Staten Island, together on the same stage to explore cross-cultural approaches to musical improvisation. The concert will be presented at the gazebo on the iconic Staten Island Boardwalk as part of SIA’s collaboration with the Boardwalk Events Initiative Group programming from (April) May-June.This boardwalk initiative is led by Mark Tranchina at the Vanderbilt/South Fin Grill and NYC Dept of Parks and Recreation. Curated around themes of improvisation and cultural heritage the line-up will feature Sri Lankan Hevisi drumming, Afro-Puerto Rican bomba y plena, Ghanaian percussion, Middle Eastern folk musics (North African, Turkish, Arab and Jewish), and American Jazz. The program will combine individual performances with a jam and artist talkback/Q&A session.

This “encuentro,” to borrow the spanish term, or impromptu meeting between musicians from diverse backgrounds and traditions, will showcase several distinct approaches to time and improvisation in music. As the performers will elucidate however, the cultural significance of such methods and techniques reaches far beyond the bandstand and can also be used to find points of connection and inter-cultural collaboration.