Staten Island (yes, Staten Island) wants to be the next tech hub. Its secret weapon: the North Shore, home to cheap commercial space and one of the best broadband networks in the nation. 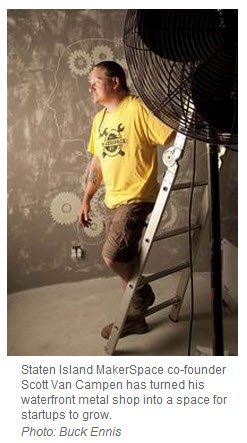 If the de Blasio administration achieves one of its stated goals, tech workers will soon be pouring off the Silicon Ferry, cascading past ahuge Ferris wheel, piling into the hip coffee bars of newly minted NoSho, unzipping their hoodies and getting to work in New York city’s hottest tech scene: Staten Island’s North Shore.

Mayor Bill de Blasio, in his call for a “true five-borough approach” to tech, has made it clear he wants to grow the industry in even the unlikeliest of places—and that includes Staten Island.

The borough has its secret weapons. The island, especially the North Shore, has some of the least expensive commercial space left in the five boroughs and a broadband infrastructure that is among the best in the nation. Staten Island was the first borough to be fully wired with Verizon FiOS fiber. And according to server-network company Akamai Technologies, Staten Island ranked second in the U.S. in terms of average connection speed by city area. (Only Riverside, Calif., was faster.)

“This is a very exciting time for the North Shore of Staten Island,” Borough President James Oddo said, deeming it “an area that is well on its way to becoming the hippest waterfront community in the city.”

That may be typical borough-president hyperbole. Right now, there are only about 15 tech firms on the island, according to the city’s Made in NY map of tech startups. (By contrast, a single building in the Flatiron district, 902 Broadway, more than triples that count, according to the city.) But boosters say the potential is there.