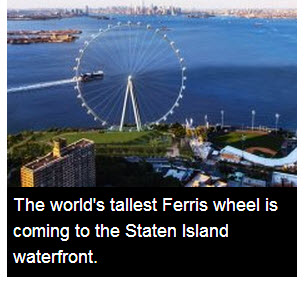 NEW YORK CITY-In the next-to-last step along the six-month Uniform Public Use Review Procedure trail, the City Planning Commission has given the nod to a redevelopment project intended to transform Staten Island’s North Shore waterfront, including a 625-foot Ferris wheel and the city’s first outlet mall. The City Council is scheduled to vote on the plan Oct. 30.

“Empire Outlets and the New York Wheel will reinforce New York Harbor as a local and international attraction of significance,” says Donald Capoccia, principal of BFC Partners, which is developing the 340,000-square-foot retail complex in the North Shore neighborhood of St. George. “With access to 8.3 million residents and 52 million tourists annually with $36.9 billion a year in direct visitor spending, these projects will transform the North Shore of Staten Island into a thriving economic engine, echoing its impact throughout the borough and the city.”

Robert Steel, Deputy Mayor for Economic Development, notes that the Bloomberg administration is “Mayor Bloomberg is committed to revitalizing the city’s 520 miles of waterfront and bringing jobs and private investment to all five boroughs.” With the commission’s approval of the New York Wheel and Empire Outlets projects, “we are one step closer to bringing these projects to life in St. George.”

The development of two adjacent sites near the Richmond County Bank Ballpark in St. George is intended to “complement and bolster the economic growth of St. George and of Staten Island,” according to the New York City Econmic Development Corp., which is spearheading the effort. “It will attract more of the approximately two million tourists who ride the Staten Island ferry each year, as well as increased numbers of New York City and Staten Island residents, to the underutilized waterfront.”

The New York Wheel will be built just north of the ballpark. Its 625-foot height will make it 84 feet higher than the Singapore Flyer, currently the tallest Ferris wheel in the world, although an even larger one is reportedly in the works for Dubai. The wheel will consist of 36 capsules, each able to carry up to 40 passengers with a maximum capacity of 1,440 people per ride. It’s expected to attract as many as 30,000 riders per day during peak season and an estimated 4.5 million visitors per year.

A 125,000-square-foot Terminal Building will sit at the base of the wheel. It will include retail, restaurant space, a 4-D theater and exhibition space about New York City history, alternative energy and environmental sustainability. A 950-space structured parking garage will also be built on the site, featuring a green roof with open space, solar panels, planted gardens and a playground. The latter is among the components that were added following the project’s unveiling last September.

The retail component, Empire Outlets, will hold as many as 125 designer outlet retailers and a variety of restaurants and cafes in a 340,000-square-foot space. The plans also include a 200-key, 130,000-square-foot hotel, and a 15,000-square-foot banquet facility. BFC also plans a 1,250-space structured parking garage below the retail and hotel components to accommodate commuters and tourists alike. Construction is expected to begin next year, with a 2016 completion date targeted.