The old wooden floors and nearly all of the original interior were demolished and hauled away months ago. Some of the wood will be re-milled and retrofitted for use in the new interior, which is taking shape inside an aluminum skeleton, “a new building within the building,” according to Elizabeth Egbert, the museum’s executive director. 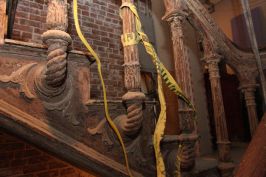 “Once we’re in,” Ms. Egbert said, “the curators will take over and put up the new exhibits.”

It won’t be obvious to visitors, but the museum will be green, heated and cooled by a geothermal system of 32 loops extending 500 feet into the earth, where the temperature is constant. The loop field is now invisible, blanketed with new grass.