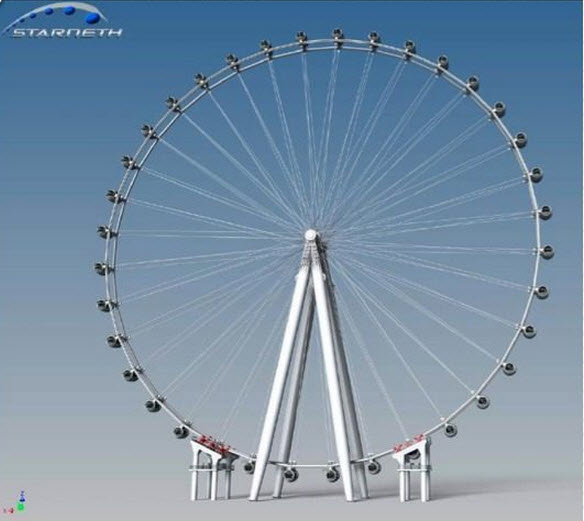 The giant observation wheel slated for Staten Island’s northern waterfront, touted to be the tallest in the world and temporarily named the New York Wheel, is one of the most buzzed-about city projects of the decade. We’ve already reported the numbers, as well as some mindbogging visuals: a 630-foot tall structure that will be open almost 365 days a year, will hold about 1,400 people per hour in its 36 capsules, each of which will make 38-minute rotations at a rate of about 10 inches per second. But at a presentation last night at laminate manufacturer Trespa’s Soho headquarters President and CEO Rich Marin divulged more details about a plan that can be described as completely grandiose, brilliant, and outrageous. Marin’s goal is to make it an icon for visitors, not mere amusement. “We want to make this feel not like they are going to Coney Island,” Marin said, “but like they are going to the St. Louis Arch or the Washington Monument.” Here now, the most interesting tidbits we learned:

12) The timeline (a.k.a. when it will be done): The wheel just entered the city’sULURP approval process and is now at the stage of getting signatures from community boards. The team will need to get the necessary “yays” from the borough president, the City Planning Commission, the City Council and the mayor—all before the Bloomberg administration leaves office. The goal is to break ground in the spring of 2014, with a grand opening on July 4, 2016 after two years of construction.

11) Sizing up the competition: The New York Wheel will be significantly taller than the structures it considers models, the London Eye and the Singapore Flyer. But then there’s the matter of a rival in the Middle East. “Dubai is saying they are putting up a 688-foot wheel. I’m on the record saying, ‘That’s great, you can see more sand,'”Marin said. “Big is not the only issue here. Big and well-located are the issues here. It’s [in] the gateway to America.”