Visit a Manhattan museum to learn about Staten Island? That’s what organizers at the Museum of the City of New York are hoping people will do, and that what they see inside will encourage them to make a trip to the island.

Staten Island is no stone’s throw from the Museum of the City of New York on Manhattan’s Upper East Side, but for the next several months an exhibit about the borough will make its home there.

“One of the goals of the exhibition is not only to inform people about the history of Staten Island but also to let them know what’s here right within our five borough city. And hopefully to encourage people to get off the ferry and to explore all of the things that are right at their doorstep,” said Sarah Henry of the Museum of the City of New York.

Called “From Farm to City: Staten Island 1661 through 2012” the gallery chronicles the 350 year history of the borough by looking at the people, communities, institutions and city agencies that have shaped its formation. Using land use patterns as a theme, the exhibit is divided into four sections: Farms, pleasure grounds, suburbs and cities.

“I think it’s a place that a lot of people are unfamiliar with. So even grasping the geography of this place we wanted to be sure to cover the island from top to bottom to give people a sense of what’s really there today,” said Guest Curator Liz McEnaney. 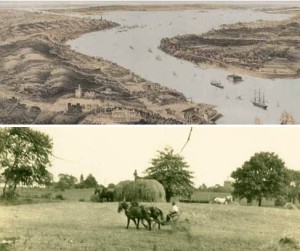 It took organizers two years working with Staten Island cultural institutions and museums to compile the photos and artifacts for the exhibit that they felt would adequately tell Staten Island’s story.

“We have really nifty things from the era of the resorts on Staten Island. Some of which were built by the breweries so we learned a little bit of the history of the brewing companies: Beer barrels, beer bottles,” noted McEnaney.

The gallery has an interactive component, too. By logging onto mcny.org you can click on old maps of the island and compare them to what now exists.

The exhibit opens Thursday and will run through January.